Come winters and the body starts to crave comfort food like never before. And it is okay to pay heed once in a way without overdoing it. This Rajasthani gatte ki sabzi is your saviour!

Gatte ki sabzi, originally from Rajasthan has now found popularity across India and there are quite a few versions made. Two of the more popular kinds are:

In both versions, the gatte (chickpea flour dumplings) are steamed and not fried. I love both versions personally and relish them with some hot ghee rice or ghee phulkas.

Inspiration From A New Cookbook

Now, let’s get to the actual recipe for gatte ki sabzi with paneer. I know, I had you at paneer, isn’t it? So, I have recently invested in some Indian cookbooks by renowned authors like Madhur Jaffrey and Pushpesh Pant amongst others. The other day I sat turning pages of one of those cookbooks – The Indian Vegetarian Cookbook by Pushpesh Pant. While ogling at the breathtaking food photography, I came across the Stuffed Dumpling Curry (Bharwan Gatte). And just like you, I was curious.

I am well-traveled and have tried a lot of different kinds of dishes across India but never this one. Needless to say, I had to try it out and if you can take my word for it these are nothing like the usual gatte ki sabzi. For one, they are fried and not steamed. In addition, the mildly flavoured paneer stuffing takes it to the next level. And as the book aptly states –

The recipe is straightforward and I have stuck to the original version, with minor tweaks. Preparing the chickpea dough, preparing the stuffing, stuffing the dough, frying, and dunking it into the yogurt sauce. It all takes approximately 30-40 minutes to put together. With some rice or chapatis, this is a complete meal perfect for lunch. Add a side of salad and one doesn’t really need anything else.

The most important step is getting the chickpea dough right. The recipe suggests using 4.5 tbsp yogurt, 6 tbsp water, and 4 tbsp ghee My suggestion is to add them gradually while kneading the dough to avoid getting it too soft. Sifting the chickpea flour is also very important to avoid any lumps. Once you have the right consistency dough, the rest of the recipe is a cakewalk. Another pro-tip. Grease your palms while shaping the dumplings as the chickpea mixture tends to get quite sticky. 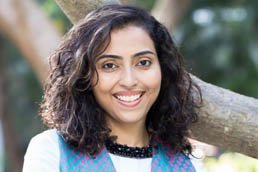